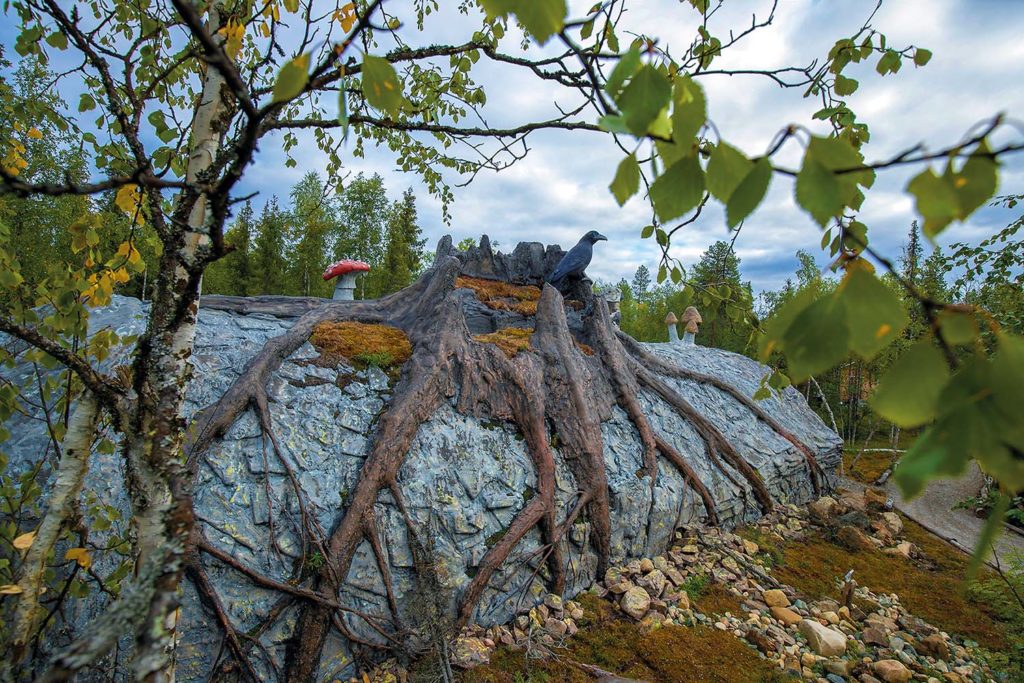 Quiet, walk ever so quietly along the paths of Elves Village towards the Hideaway, and you may hear an amazingly ear-soothing sound. It comes from the secret kingdom of the goblins.

You will see a large stone. A giant fir has grown on it since long ago. In the stump, all that’s left now of the fir, there’s a crow’s nest. This is the dwelling of the Great Avariti, who watches carefully anyone who approaches the stone. The roots of the fir have wound into the cracks of the stone over hundreds of years.

You have arrived at the Seita-stone.

Its gigantic door opens, squeaking. Step in, don’t be afraid. You will see something unforeseen and exciting. For the first time, you are in the underground kingdom of the goblins, where elves, goblins, people and other folk of the forest live in peace and harmony, respecting and helping each other. 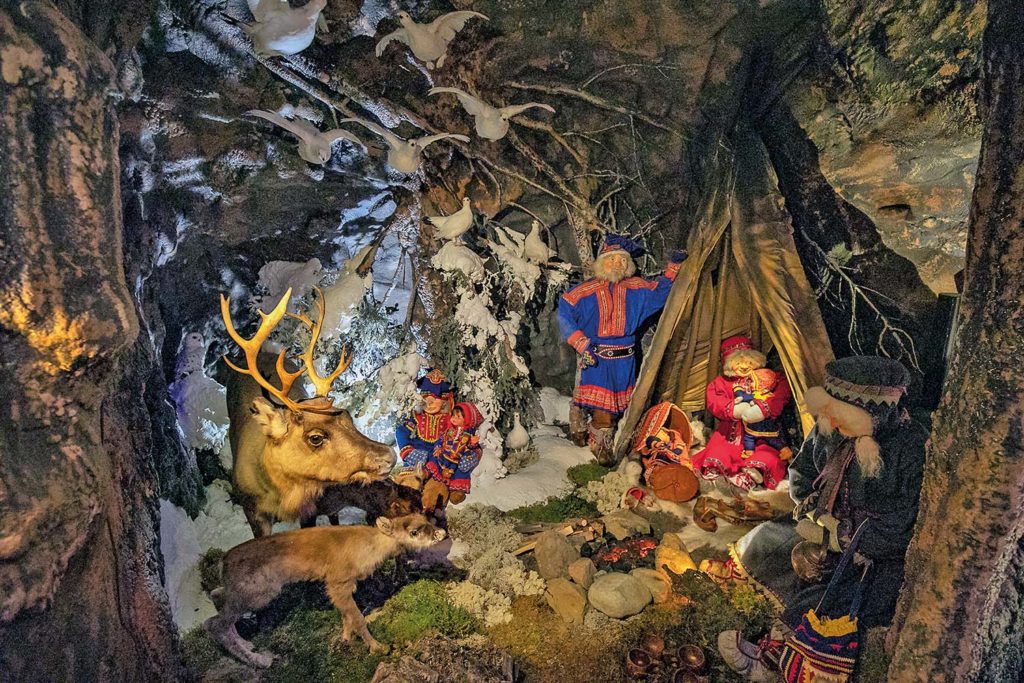 Especially here in Lapland, where we have always had plenty of goblins, the co-existence of people and these two very different inhabitants has been vitally important. Throughout the centuries the elves have supported, and the goblins have helped, the people of Lapland to take care of the reindeer and finding food. In every kind of survival. 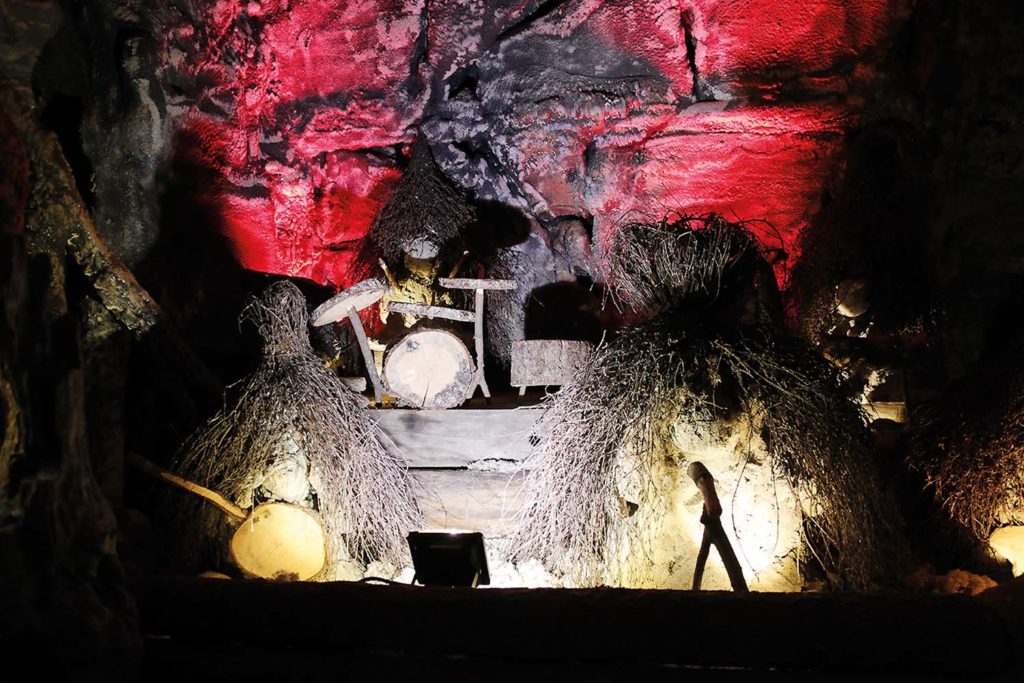 Every goblin loves music and singing. The twig goblins are special, they compose the most unusual music. As you can see, MAMAMA (the twig goblin mother) has even founded her own orchestra with her young ones. The goblins’ favourite instrument, the willow pipe has not been selected for playing the latest, ear-catching masterpiece. 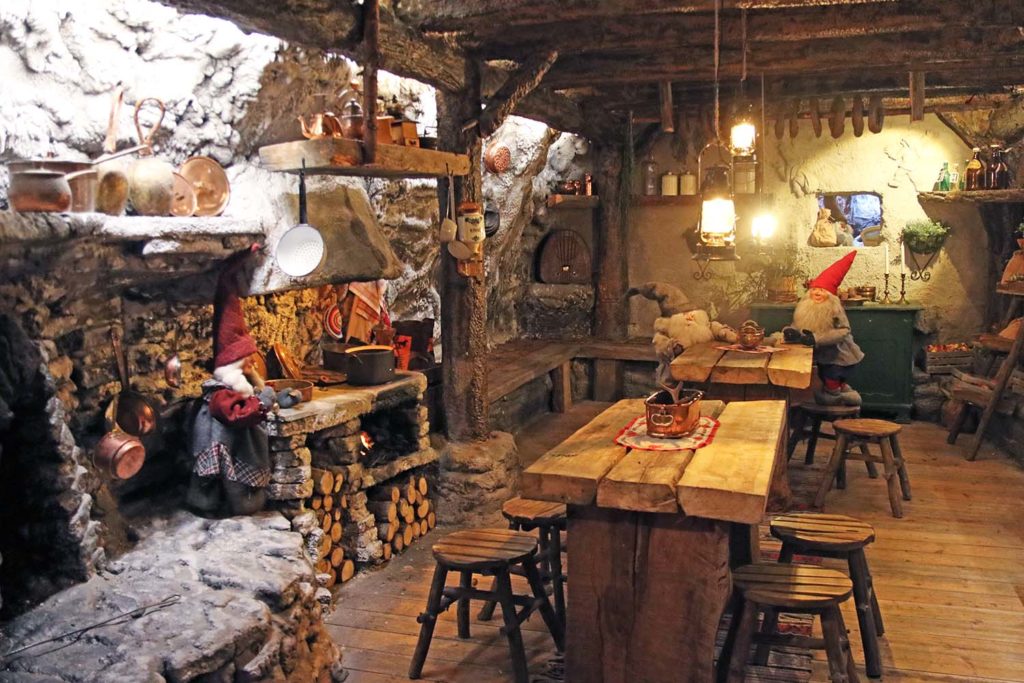 There’s always a lot of bustle in the elves’ kitchen. There’s clinking and rattling. As the wood logs crackle in the fireplace and the stove, the elf family gathers to make plans for the future. Together they bag flour, cook porridge and bake bread, and of course, sometimes the goblin family gets its share. 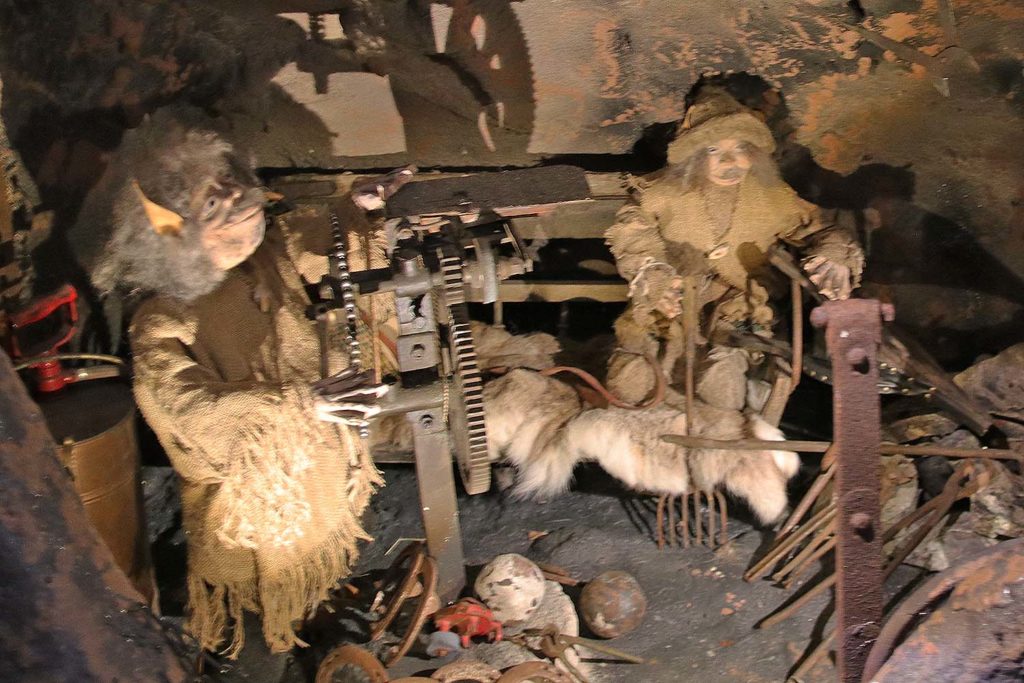 The Shoblins, or the goblins toiling away at the workshop, are always the descendants of workshop goblins. In their hands, shoes are created for the people’s horses, as well as forging the reikeli-latches and other elf necessities. Co-operation! 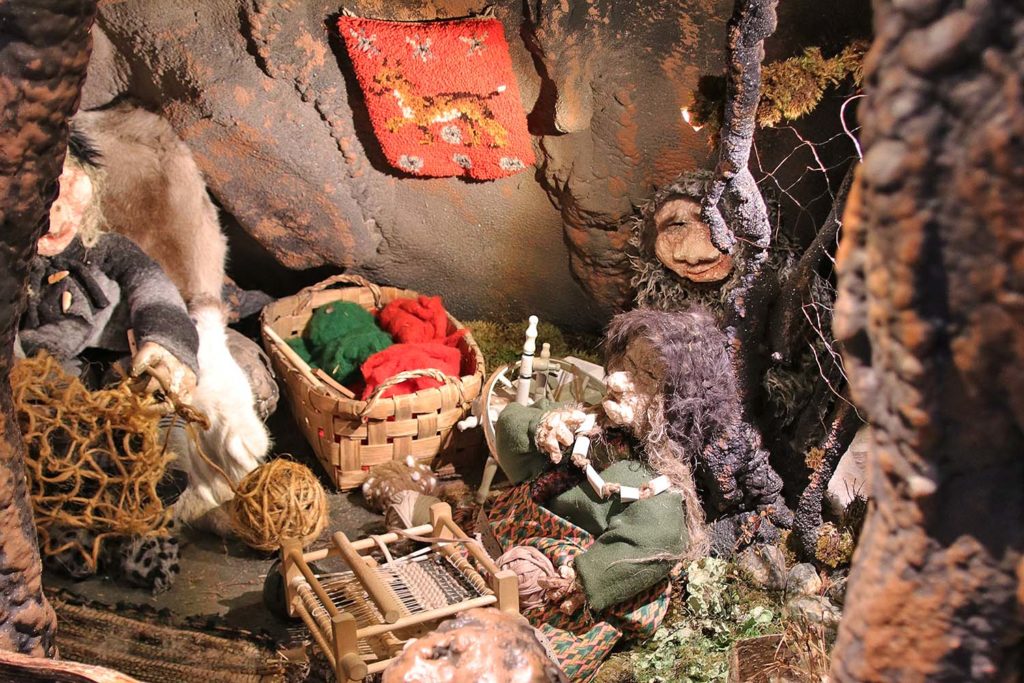 In the sewing shop the old and slightly jaded great-great-great-grandmother MAAN knits fabrics, net bags and every kind of clothing and supplies necessary for the goblins with Rumbs’ sister KERT and his brother REPS. 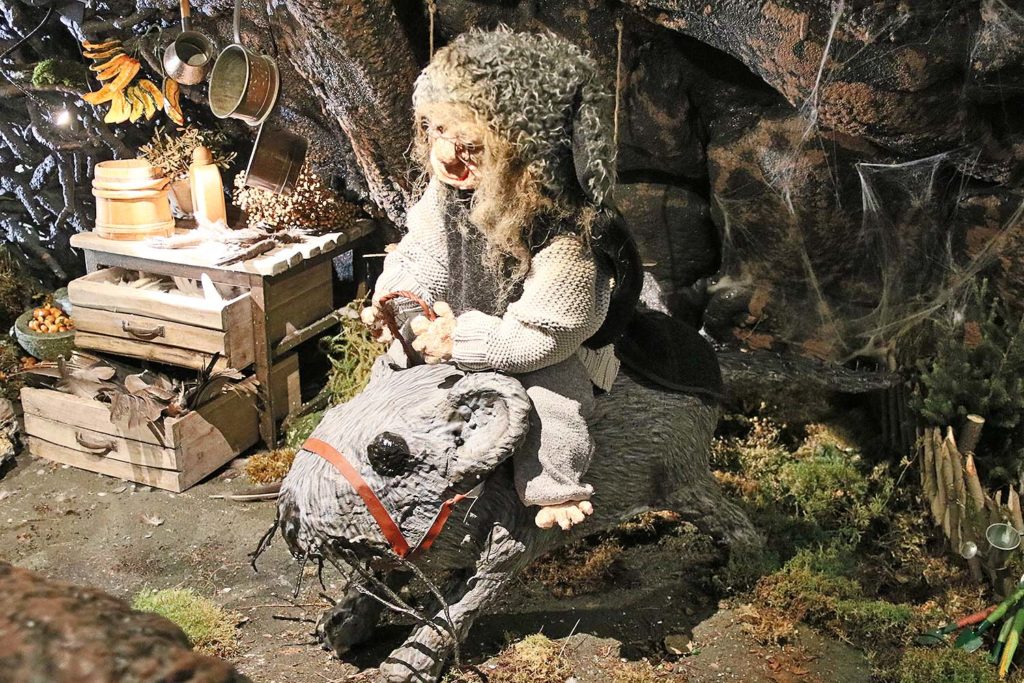 The kitchen cattle are minded by Lonk’s daughter LII. The goblins are so self-sufficient, they even quarry their own salt from the rocks. In the kitchen, the little boy VERT seems to be riding a giant mouse, but if you will remember, in the world of the goblins, everything is not at all what it seems. This mouse is really his big brother KUOPS, who likes to shift shape and play with Vert. 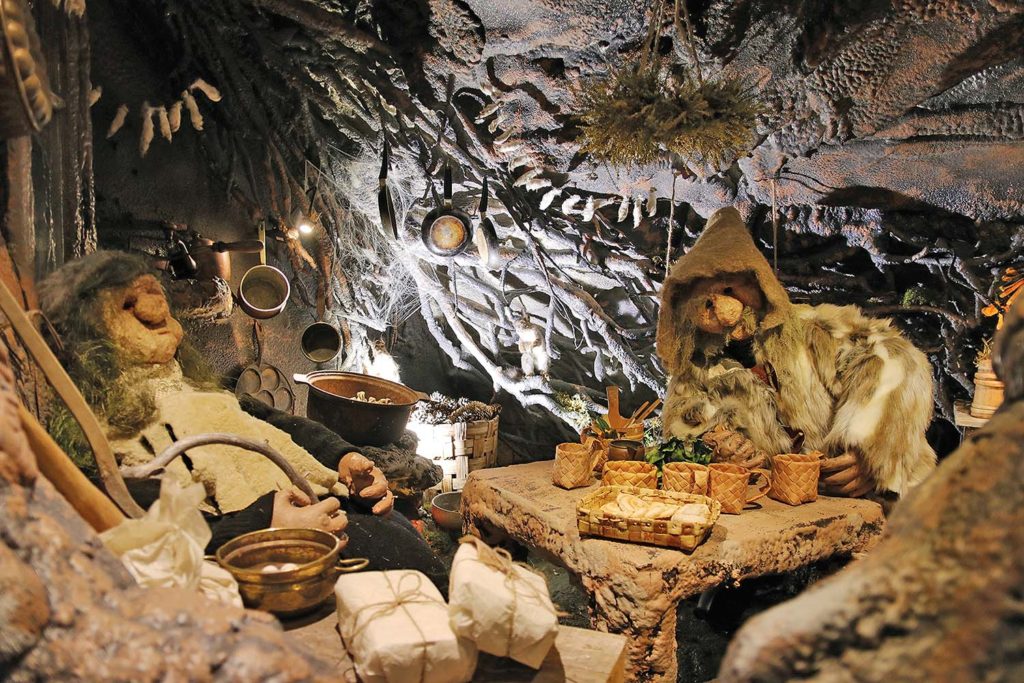 The ruler of the Seita-stone goblins is master RUMPS. His family is big: children, wives, grannies, siblings… Rumbs know all the secrets. For example, how you can turn into an ant, spider or a giant maggot. Or even into a human on earth. How to find gold, heal sick animals or smell the most sumptuous cloudberry spots.

The goblin master always has two wives. So does Rumbs. The old wife LONK and young, sweet PAPS Their division of work is clear. They both have children, and each of them is very tenderly and equally loved. Lonk cooks, plucks the birds, cleans, polishes and takes care of everything in the kitchen. 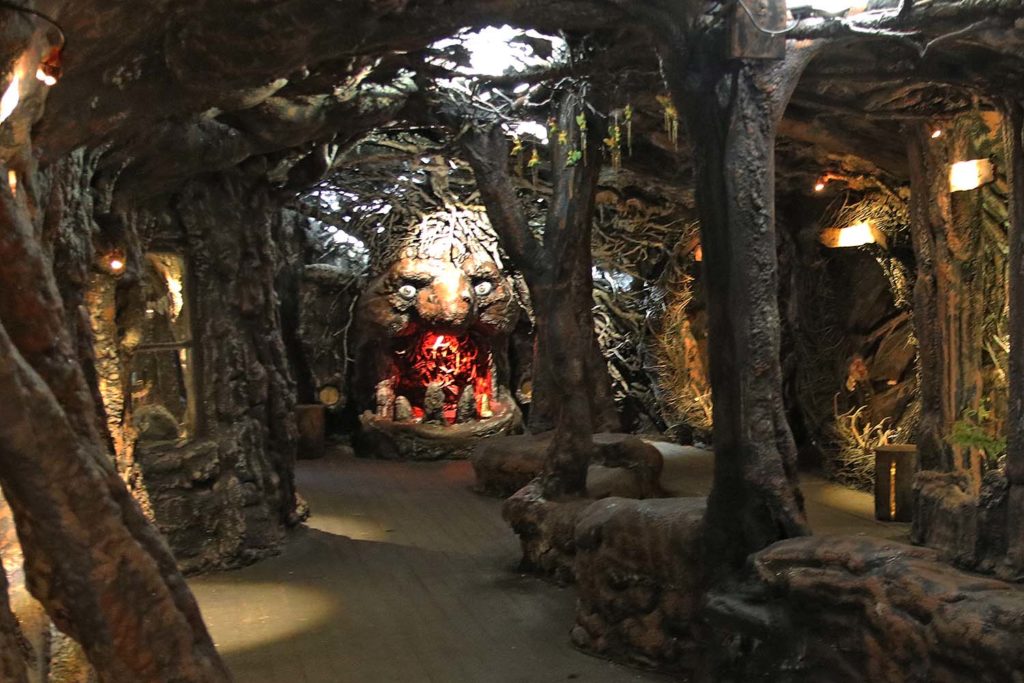 Big and frenzy-like Sterntroll is a member of the goblin family. One day, a long time ago, Rumbs found him, lost and starving, in the depths of the forest. The goblin family took this weakened troll to live with them, fed him, making sure he would be fine. And since that day, the hobgoblin has been grateful and makes wishes come true for everyone who tosses a coin. 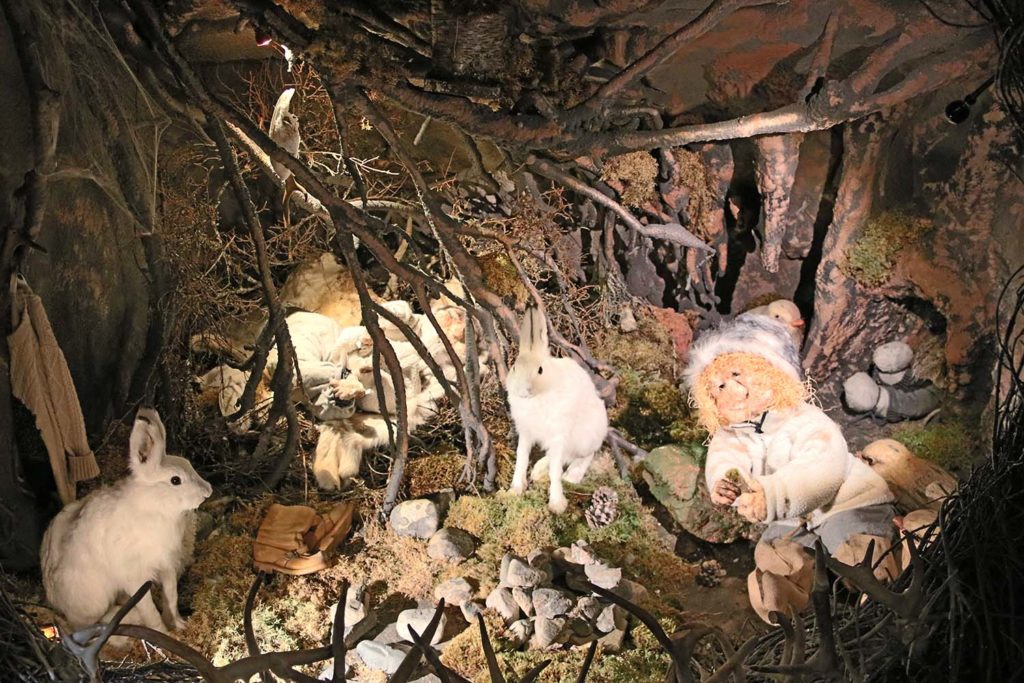 The goblin’s favourite place is, of course, his own nest. In the twig nest of the nursery, twin boys TEPS and HEPS are snivelling. Stone castle builder HERT loves his moss lollipop. Something is wrong with son KURT, who is crawling along the small corridor to mother Paps. 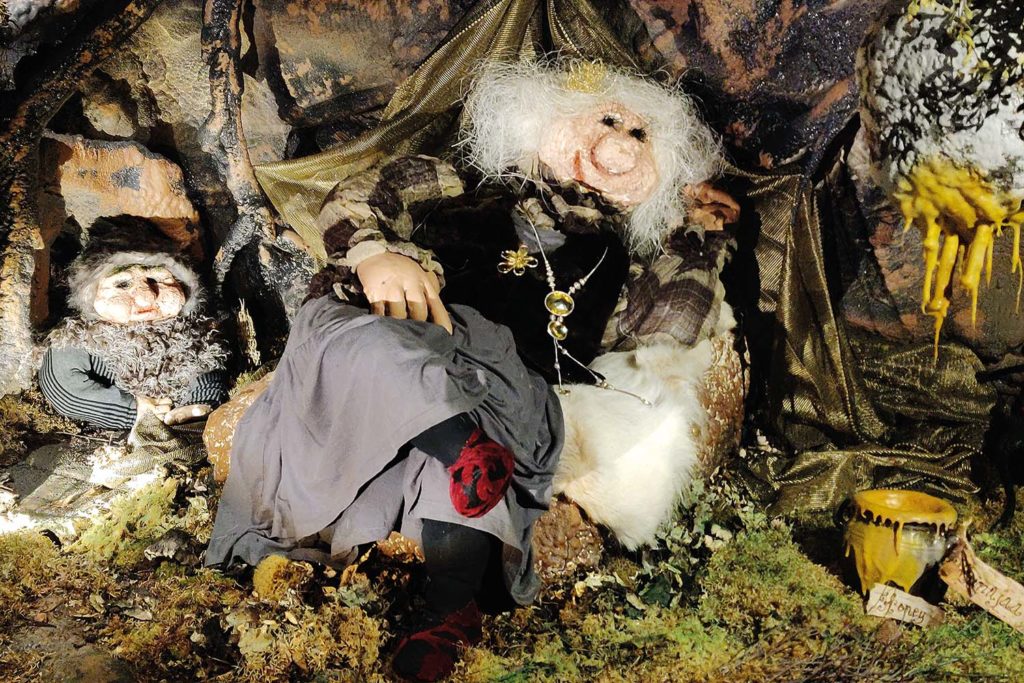 The young and beautiful new wife of Rumbs, PAPS, often rests on her divan admiring herself in the mirror, tasting her honey. She, like all goblins, loves beautiful objects, crystals and, especially, parties. The goblins have plenty of celebrations, the joy of which you can feel under your feet, as the ground trembles. Even distant relatives arrive at the parties, from as far as Saana mountain. So now you know, that trembling and rumbling you can occasionally hear in Lapland is not an earthquake, but those joyful goblin parties. The sweet Baps is a real enchanter. This has not gone unnoticed by Rumbs’ old bachelor brother HÖMS. 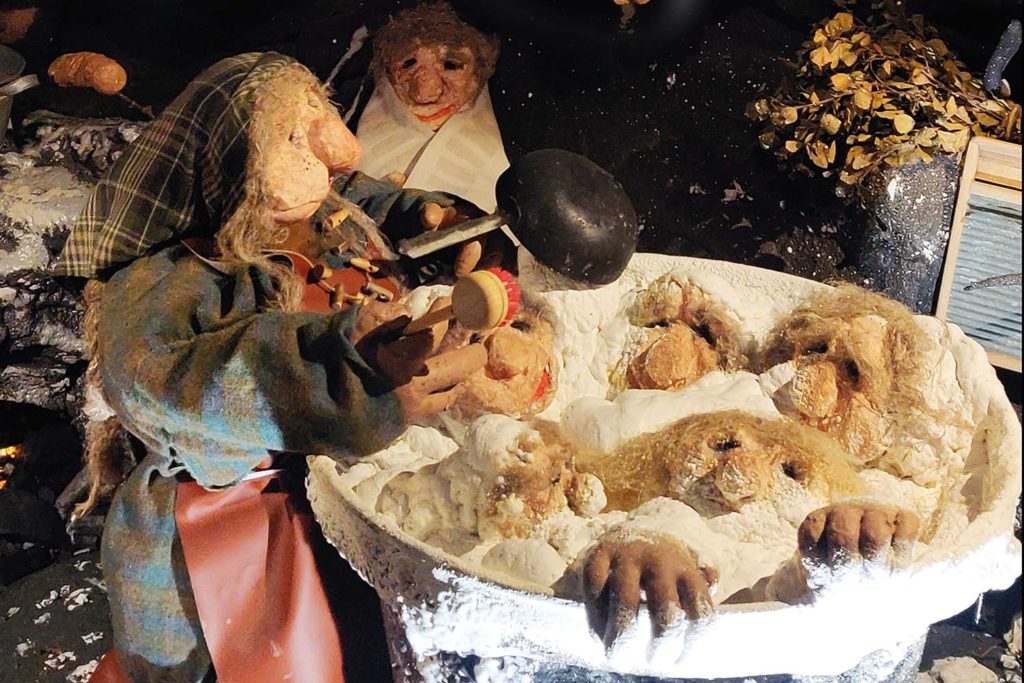 The goblin family is very strict on cleanliness, although you might have imagined otherwise. Given that they live underground. The Sauna is a very important and holy place for them. No rampages or tricks are allowed. Grandma MART takes care of washing. She brushes and washes all the little goblins thoroughly and with care. VIKS, TUIS, HOST, TOPS and REKS are washed in foam once a week. Already, the clean and tidy brothers are sitting on the sauna edge, MIKS and HANK.

Big brother KENK, wrapped in his towel, is roasting the goblins’ cherished, self-baked cloudberry bar. The recipe for this super delicious sausage-like delicacy is more secret than secret. We have been able to find out, though, that it has lots of honey and cloudberries in it. That is a really sweet sausage.

COUSINS OF THE ARCTIC OCEAN 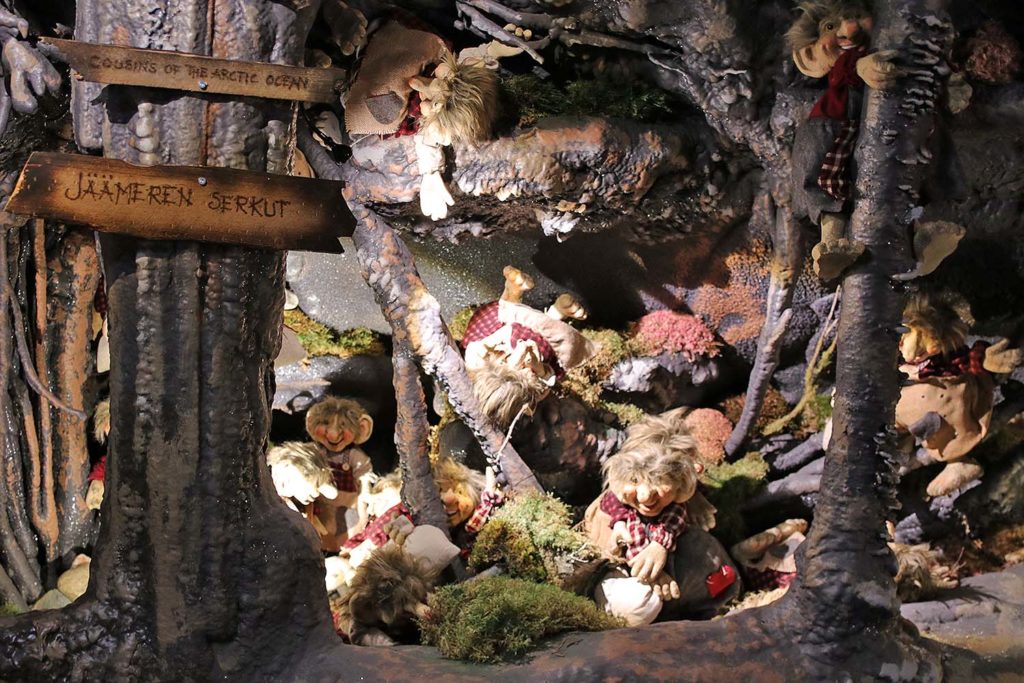 At the goblins’ level you can also meet Norwegian trolls from the Arctic Ocean, who are visiting their cousins. As the Norwegian border is so close to Lapland, these wild trolls often come visiting the goblin family.

And a goblin dwelling wouldn’t be anything without a decent guard. This job has been given to TARU the dog with its cute puppies. 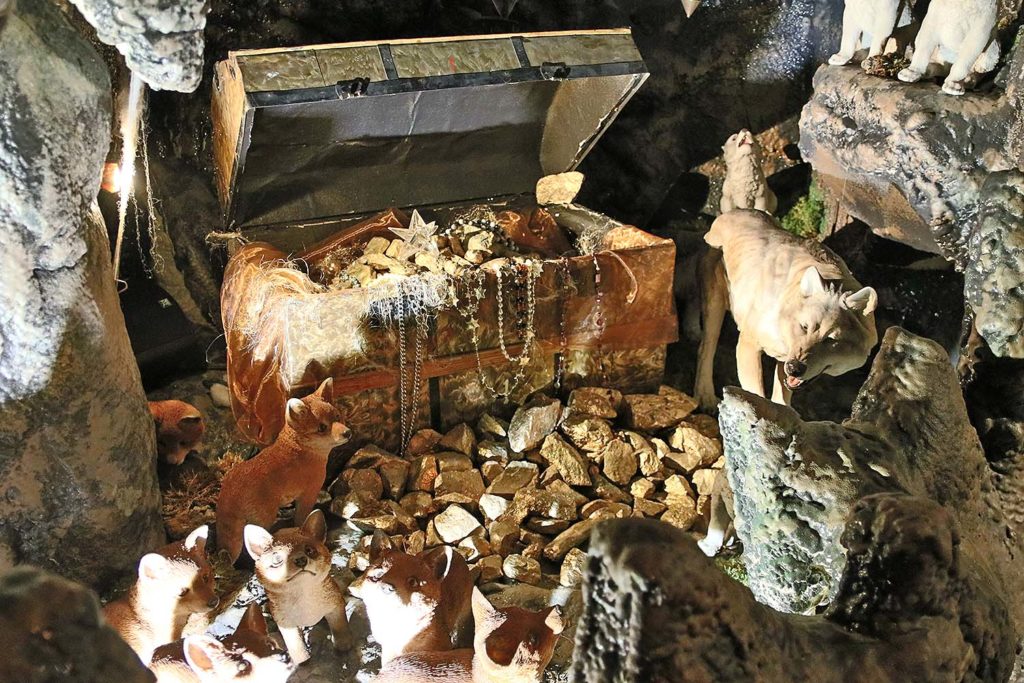 Very deep in a secret hole bored into the stone, where the wolf and fox mothers are looking after their cubs, you can see the most precious treasures of the goblins – a chest full of gold chunks, gems and pearls. The goblins have always been known for their skill in finding treasure. And thanks to their good sense of smell, it is not at all difficult for them to find gold in Kittilä, where there’s plenty of ore everywhere.

If you look behind you, you will see a black, waspish creature. It is Hiisi, who watches over the secret treasure vault. You may look at these treasures, but don’t you dare touch them even with your fingertip, because the howling of Hiisi will wake the goblins, who will arrive, and when they do, they won’t be gentle or friendly at all. 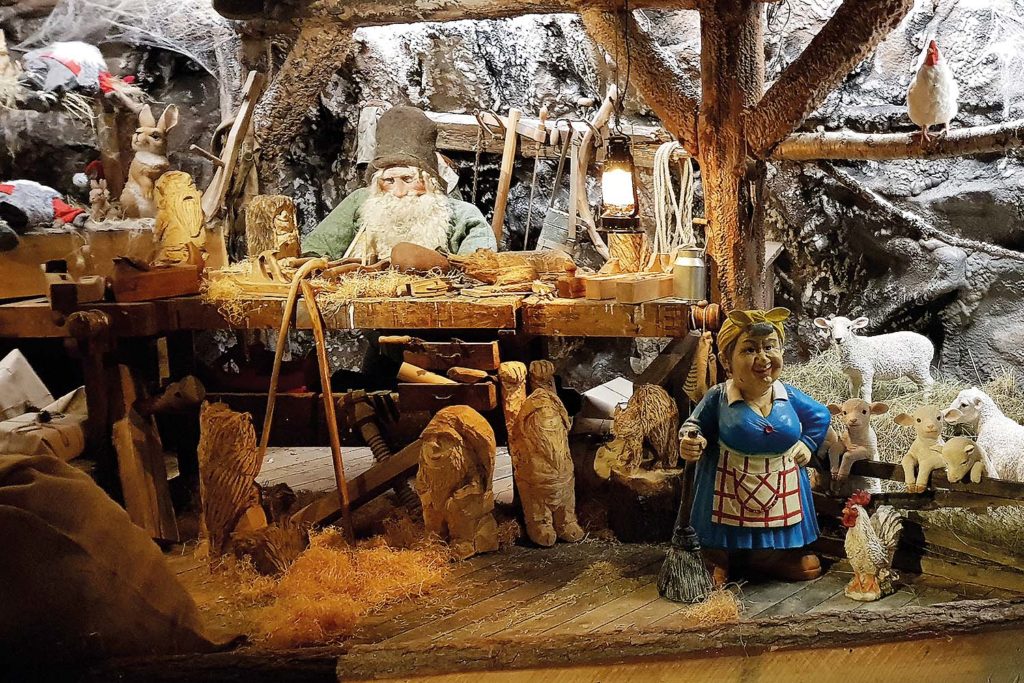 The Seita-stone elves have lots to do. There’s washing laundry, sewing clothes, minding the chickens, lambs, piglets and cows. At the gift workshop, the elves have so much going on, that they inevitably get sleepy from time to time. 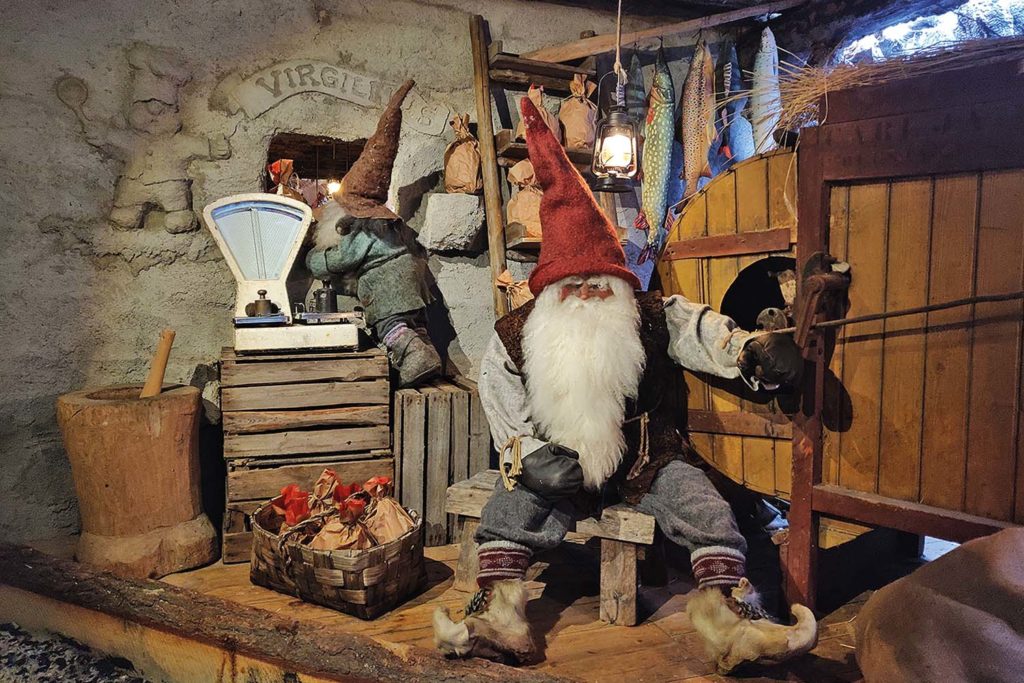 The big old elf is the only one allowed to run the valuable kasmasiini – a grain sorter, which separates the grain from the chaff. And when the grains are bagged, they are sent to the kitchen straight through a hatch. 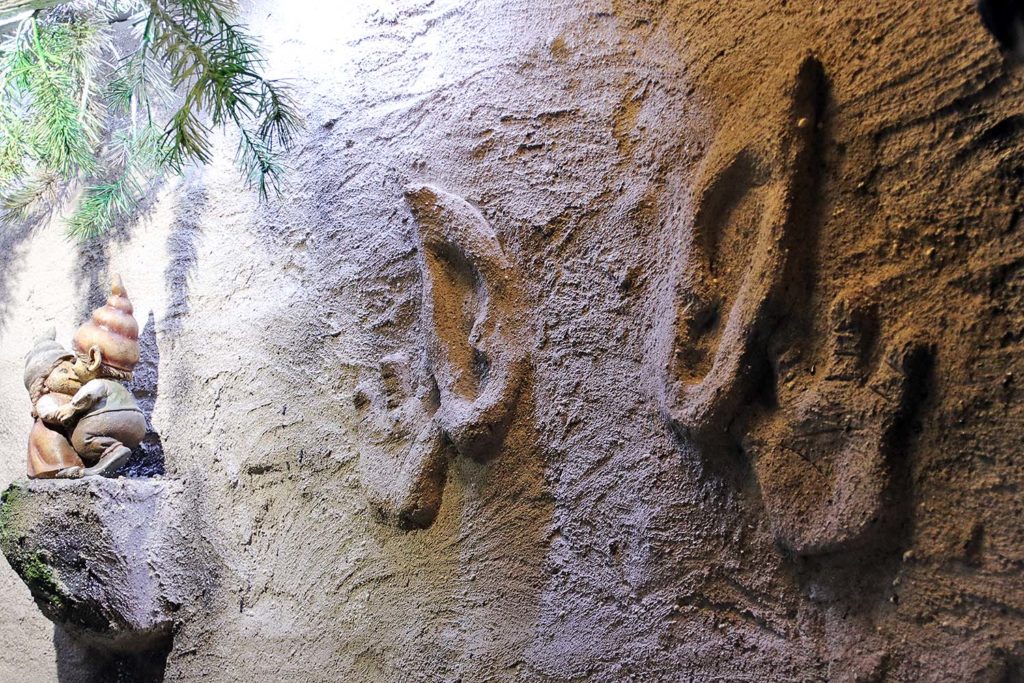 When you look around very carefully, you will see that even the walls are alive. There are many kinds of elves, footprints, and even ears, which can hear the quietest whispers. If you look really closely, you will even find the Elf in the Yellow Dress hiding on the wall. A happy flock of pixies may suddenly fly by you.

Now you are familiar with the secret world of the Seita-stone.
After bidding goodbye on your way out, you can still wave to the glad little goblins living in their treehouse.